With the development of technology and the integration of products, voice chips have gradually replaced a variety of voice equipment applications in various occasions. Such as car reversing radar, small appliances, advanced toys, anti-theft devices and other equipment are equipped with voice chips. Due to the wide variety of chips and different functions, engineers will have some trouble in choosing a voice chip. Therefore, manufacturers need to provide customers with some reference selections for voice chips. 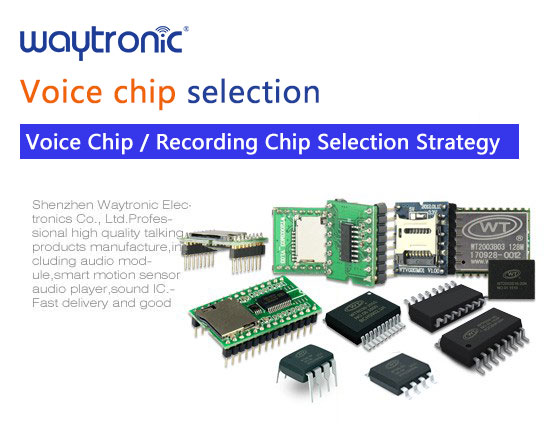 1, the choice of recording chip and playback chip

The voice chip can be basically divided into a voice recording chip and a voice playing chip from the use function.
Security systems, conference recording systems, recording toys and other products are required to have recording functions. The development of this type of products will use recording voice chips. The chips with recording functions on the market mainly include ISD solutions, and WTR030 which currently replaces ISD solutions. WTRO50 and so on. The recording module developed by the recording chip has a simpler peripheral circuit and better effects. For example, WTV-SR and WT2000B02 recording modules use external FLASH or TF cards as storage centers, so they can record longer voices.

OTP (One Time Programable) refers to a one-time programmable voice chip. The voice can only be programmed once. It is suitable for applications where there is no need to modify the voice and the voice content is short. The length of the playback can be divided into 10 seconds and 20 seconds. 40 seconds, 80 seconds, 170 seconds, 340 seconds. The OTP voice chip is characterized by a single-chip solution and low price. It is suitable for small and medium-sized mass production, and even small quantities can be obtained in time. Otp voice chips are mainly used in low-end toys, sweepers, electric vehicles and other products.

The FLASH is rewritable and rewritable, and the storage space is large. The control mode and voice content can be changed at will, and a larger voice file can be stored. Generally, the FLASH ROM that can be plugged in has 1Mbit to 128Mbit. Because it needs to use "voice chip + FLASH" to work, the price is slightly higher than OTP, suitable for sample production or small and medium-sized batch production. Voice chips using FLASH ROM include WT588D, WTV020-S, and WTV040 (special programs need to be programmed).

The SD card has become a major mainstream storage carrier on the market, and its advantages such as low price, large storage space and strong portability are favored by most manufacturers. The voice chip also develops in the direction of the external SD card. The manufacturer designs SD card players that can play various audio formats according to the characteristics of the main control chip, such as WAV, MP3, WMA, AD4 and other mainstream audio formats. WT2000 module and WT2000 module can play WAV and MP3 audio formats when external SD card is plugged in, and also indicate external SPI FLASH.